Update From Pete: All trails are complete. There was 5-10cm of fresh overnight snow on a compacted base. The main trails have been groomed double width to allow skating as well as two classic tracks.

It was -1degC when I left forest & I dont think it got above freezing all day.

Alan says: Pete’s done a storming job getting around all those trails and conditions don’t get much better than this! Thanks to Peter and anybody else who helped with they pisteing today. Also a big thank you to Colin Miller for his trail clearing.

First surprise today was the car park — a sheet of ice giving no traction on tyres or on foot. Second surprise (more enjoyable) is that there has been no significant loss of snow at the Clash, except Cabrach Corner which looked patchy due to exposure to sun, wind and any rain. However, groomed trails have turned into neve and are disconcertingly fast. Trails under larches have been strewn with twigs, many of which I removed; while under the spruces there are millions of needles, giving something of braking effect. They will add a distinctive layer to the snowpack if it gets deeper. I spent most of this morning on the softer, sugary snow on the verges. A couple who had driven over from Boat of Garten sensibly decided that Sheepfolds was the better option than the groomed trails. There were also 2 other skiers out this morning. Surprisingly the car park was not too windy, but up at the Orange mast it was storm force. Here at Inverurie there have been dangerously violent crosswinds and gusts on the A96, on the exposed stretch at the north end of the bypass. Here is my report on Winterhighland:

“Groomed trails are now as hard as neve, and very fast, although for rather more comfortable skiing it’s usually possible to find softer, sugary snow on the verges. This means that ungroomed trails such as Sheepfolds should be more pleasant than the main trails. Compacted snow depths are 15-20cm, with 20-25cm on the uncompacted verges. The car park is currently a skid pan”.

Thanks to Colin Miller for report.

Yesterday and today’s snow has reached the Clash, falling on the thin base left from last week. Conditions are now excellent and some pisteing has been done around the range. More details will be posted as we receive them

It will be no surprise that the wet weather of the last few days has taken its toll on the Clash trails & there is currently no significant continuous stretches of skiable snow to make skiing worthwhile. The Glace de Clash did still have 200m.

It was 0-2degC at car park today with sleet but snow on the highest trails. We need sopme more snow but the forecast doesn’t look too promising over the next few days but hopefully it will get cold again before the end of the year. 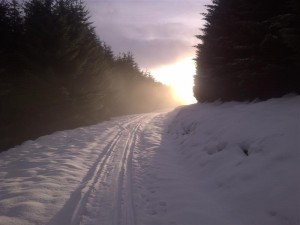 the higher trails. Some of the lower trails are thin or bare e.g. bottom part of Range Way but I’m told the skiing was great along Hedder Wye. Attached photo from http://www.winterhighland.info/forum shows conditions along the Haute Route. 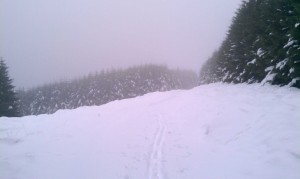 I skied the Haute Route this morning. The temperature was  3C in the car park. Conditions were damp with frequent light rain showers. There was plenty of snow throughout the Clash, however the cover coming up Highland Fling was in thinnish in the usual places. The rain made the snow very wet so there wasn’t much glide available. There was about 30cm of snow at the top of the Haute Route. As I left intense rain set in which will have adversely affected the snow cover. Hopefully there will still be some cover following this weekend’s warming temperatures to provide a good base for any further falls next week. Cold conditions are forecast to return from Monday.

Skiers should avoid descending or take extreme care on Leids Leap as Orange/EE engineers may be using this route to access the phone mast using vehicles. Peter Thorn has contacted Forest Enterprise regarding the situation.

Thanks to Colin Miller for the report.

Aberdeenshire received a mild dose of snow yesterday afternoon, followed by a bit more yesterday evening. Jason Williams managed to complete the golden boot tour at 5pm yesterday, with Colin Miller having abandoned an attempt to secure the coveted footwear earlier in the day for lack of snow cover.

Jason noted that there has been some track disturbance owing to recent logging operations in the Clash. Hopefully Forest Enterprise can be encouraged to make good the tracks and take down the keep out signs before the season really kicks off. He was unavailable for comment regarding the state of his ski bases after the tour ;).

There was good skiing to be had this morning early with 7-12 cm in the car park, although rising temperatures through the day mean the snow is unlikely to last that long.  Colin Miller commented today that the meteorological conditions that have driven this snow episode should hopefully resume soon, so get waxing for more pre-Christmas ski opportunities. Colin also noted that analysis of his records shows that has there have been very few winters that have had such good snow in October. 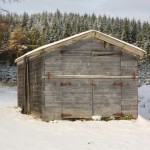 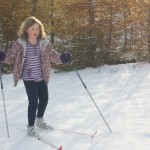 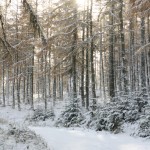 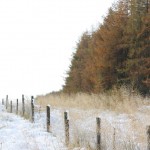 Conditions today were much improved. The lower trails were thin with wet snow 2-5cms deep, but most main trails were skiable with care on old skis. Upper trails were better with 5-10cms of sticky snow. Leids leap was skiable with care, I broke through to the rocks in a couple of places though. We skiied a full Haute Route, out via Norman’s Way, up Herring bone Hill and back down Leids Leap, Deer Track, and Classic Start. Temperature at car park was ~2C and along the Haute route it was just above freezing. We had a mix of sunshine and snow showers. 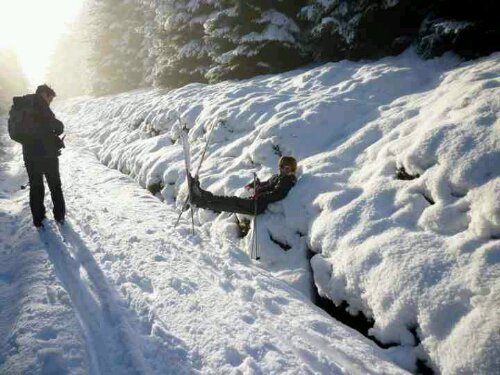 Today conditions were very variable, with altitude being the main factor. The lower trails had many bare patches, and thin cover (1-5cm) in places, but becoming slushy. Highland Fling was in good shape with 5cm throughout. On parts of the Haute Route, depths were up to 8cm, with a fresh dusting from a heavy snow shower this afternoon. However, Leids Leap was bare from the top down to the Hedder Wye junction.Temperature at car park at 2.30pm was plus 3. For Sunday, with more precipitation expected, it’s going to be a question of “wait and see” as everything depends on the freezing