The results for the 3-lap challenge and the team sprints on Sunday 6th September can be found here:

The Entry form for the Huntly Rollerski Championships and 3 lap challenge/team sprints on the weekend of 5-6th September is appended below:

The results of the Huntly sprints and the Clash Hill Climb are attached below. A special thanks to all the marshals & helpers on both days. Without whose support, patience & good humour we would not be able to run these events.

Here is this summer’s race calander

This year we had a big field of 51 skiers in glorious sunshine. Thank you to all who took part or helped. In particular Chris Barton & Gordonstoun school for marshalling & timekeeping. A special big thanks to Colin Miller Miller & Jason Williamson for last minute snow shovelling that made the entire 8.6km course skiable.

congratulations to Andrew Musgrave who finished his second Tour de Ski by finishing 52nd after the final 9km hill climb stage yesterday. This is the same place as he finished last year but I suspect in percentage terms he has improved a lot, especially after his 11th place in the Sprints. There were 7 stages this year compared to 9 last year.

Also congratulations to Andrew Young for taking part in his first Tour. He only planned to complete the first two stages in preparation for the World Juniors later this month. He looks on form.

And finally congratulations to Roy Young for masterminding another successful foray into international competition for British skiers.

Andrew Musgrave took 11th place in the Tour de Ski sprint final today, an outstanding achievement. Huntly skier Andrew Young did not such a good day after taking a fall earlier in the day. Fiona Hughes is also skiing for the UK in this year’s tour. The event was won by Norway’s Finn Haagen Krogh, with Kikkan Randall from the USA taking the women’s title.

Best wishes to all our guys for the rest of the event.

It is a busy opening weekend for Nordic Ski season with events at Bruksvallarna and Beitostolen.

Andrew Musgrave took 12th place on Friday in the 15km Freestyle race. Andrew Young came in 47th place from a field of 120.

Meanwhile at Bruksvallarna Posy Musgrave took 60th place in in the 10km Ladies Classic and Sarah Young came in just behind in 65th place. Stuart Gray, Gregor Young and Alex Standen are also out in in Bruckvallarna.

Live timings from races at Bruksvallarna are available from

On another note, there is a beautiful film on the NRK website about Anders Fortun, the man who  pistes the Norwegian traing area in Sognefell in June. If you don’t know any Norwegian just sit back and enjoy the delightful snowy scenes in the mountains

This year’s Huntly Championships were blessed with some of the best weather we have seen in the last 5 years. From the start of the races we had wall to wall sunshine and not a drop of rain fell on the track all day. 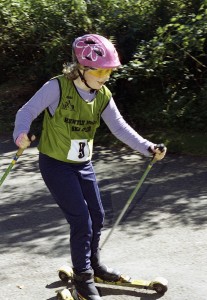 ber in any group for the day, it was great to see so many younger skiers racing. Caringorm put in a good showing in this class with club members Connor Sinclair and Stephanie Dare picking up the first boy and girl titles respectively. Huntly skier Laura Patterson picked up the fastest U10 title, beating her mother Zosia by 34 seconds.

Huntly also did well in the U12/U14 3.7km race, Oliver Newman managed to beat his brother Fergust to 1st U14, while Lynne Gray stole a 5 second lead over Beth Maclean in the U14 F classification.

In the older age groups Cairngorn dominance reasserted itself, with Robers Sircus and Hector Cowie taking off the Senior and U18 titles. Second and Third place in the Senior race was a close run thing with Carl Carrier seeing off Carl Pointer  by a  narrow 10 seconds. Watch out  next year Mr Carrier! Huntly Skier Duncan Gibb took faster U16 M while David Horsley was the fastest Vet M. Fiona Crossley had a lonely race taking first place Vet F.