Ever what the life of an aspiring Nordic World Cup skier is like, well for an insight into Young’s life go to Fasterskier.com. The interview is well worth reading.

A lot more of the club web traffic seems to be going onto Facebook at the moment, partially down to issues with Word press and partly because lots of people like to use FB

Our face book page is at

If you are looking for Huntly Nordic and Outdoor Center you can get to their web page at http://hnoc.nordicski.co.uk/

Summer is fast approaching, and with that state our minds turn to summer events. Two events not to miss in the calendar are the Huntly Rollerski Weekend on May 25-26  and the Ming Summer Madness Endurance event on the following Saturday, 1st June.

Entry forms can be found below

Huntly Nordic Ski Club will be running a Rollerski Club for children aged 5+. The aim of the club is to have fun whilst improving confidence and technique on rollerskis, and we may even enter some races! The club will meet at the Huntly Nordic & Outdoor Centre between 10.00am and 12.30pm on the following Sundays:

This year we had a big field of 51 skiers in glorious sunshine. Thank you to all who took part or helped. In particular Chris Barton & Gordonstoun school for marshalling & timekeeping. A special big thanks to Colin Miller Miller & Jason Williamson for last minute snow shovelling that made the entire 8.6km course skiable.

Update From Pete: All trails are complete. There was 5-10cm of fresh overnight snow on a compacted base. The main trails have been groomed double width to allow skating as well as two classic tracks.

It was -1degC when I left forest & I dont think it got above freezing all day.

Alan says: Pete’s done a storming job getting around all those trails and conditions don’t get much better than this! Thanks to Peter and anybody else who helped with they pisteing today. Also a big thank you to Colin Miller for his trail clearing.

First surprise today was the car park — a sheet of ice giving no traction on tyres or on foot. Second surprise (more enjoyable) is that there has been no significant loss of snow at the Clash, except Cabrach Corner which looked patchy due to exposure to sun, wind and any rain. However, groomed trails have turned into neve and are disconcertingly fast. Trails under larches have been strewn with twigs, many of which I removed; while under the spruces there are millions of needles, giving something of braking effect. They will add a distinctive layer to the snowpack if it gets deeper. I spent most of this morning on the softer, sugary snow on the verges. A couple who had driven over from Boat of Garten sensibly decided that Sheepfolds was the better option than the groomed trails. There were also 2 other skiers out this morning. Surprisingly the car park was not too windy, but up at the Orange mast it was storm force. Here at Inverurie there have been dangerously violent crosswinds and gusts on the A96, on the exposed stretch at the north end of the bypass. Here is my report on Winterhighland:

“Groomed trails are now as hard as neve, and very fast, although for rather more comfortable skiing it’s usually possible to find softer, sugary snow on the verges. This means that ungroomed trails such as Sheepfolds should be more pleasant than the main trails. Compacted snow depths are 15-20cm, with 20-25cm on the uncompacted verges. The car park is currently a skid pan”.

Thanks to Colin Miller for report.

Yesterday and today’s snow has reached the Clash, falling on the thin base left from last week. Conditions are now excellent and some pisteing has been done around the range. More details will be posted as we receive them

Please feel free to befriend us!

Posy Musgrave came 4th in the 2.5km Freestyle in Rohrardsberg, Germany on Saturday, continuting her  purple patch on Sunday picking up 5th in the 10km Classic race.

Fellow British skier Fiona Hughes came in 2nd in 10km Classic only 37 seconds behind the winner Julia Belger of Germany.

Best Wishes to Posy for the rest of the season. 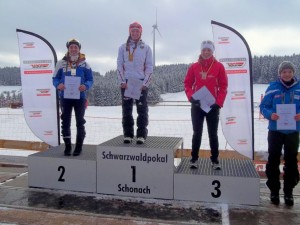