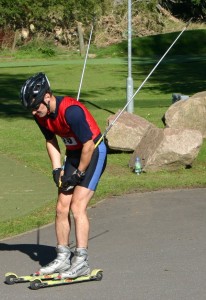 The championships this year were blessed with bright sunshine and blue skies. Visiting teams came from the RAF, GB Biathlon squad, Cairngorm and Highland Nordic. Callum Smith came took first place in the Seniors competition, whilst Sarah Young took first in the Ladies competition. Mike Dixon took the first veteran in the men’s race, and Fiona Crossley took first veteran female. Course records were once again set in the Senior Mens & Ladies 7.1km. In fact standards have risen so much that the first 10 men & first 9 ladies were inside the original course records set in 2005.

To the relief of the organizers, the council roads department had done a good job cleaning up the debris from last Thursday’s flooding. Practice on Thursday night had a distinctly “off road” feel by the car park entrance owing to the large amount of silt depostied by the Deveron.

This year marked the piloting of an automated lap counting and timing system. Despite a few teething troubles the system has proved a success and will, no doubt, be further developed for races next year.

The prizes were presented by George Gabriel. Thanks to all those who gave time to organize the races.

Results can be downloaded here